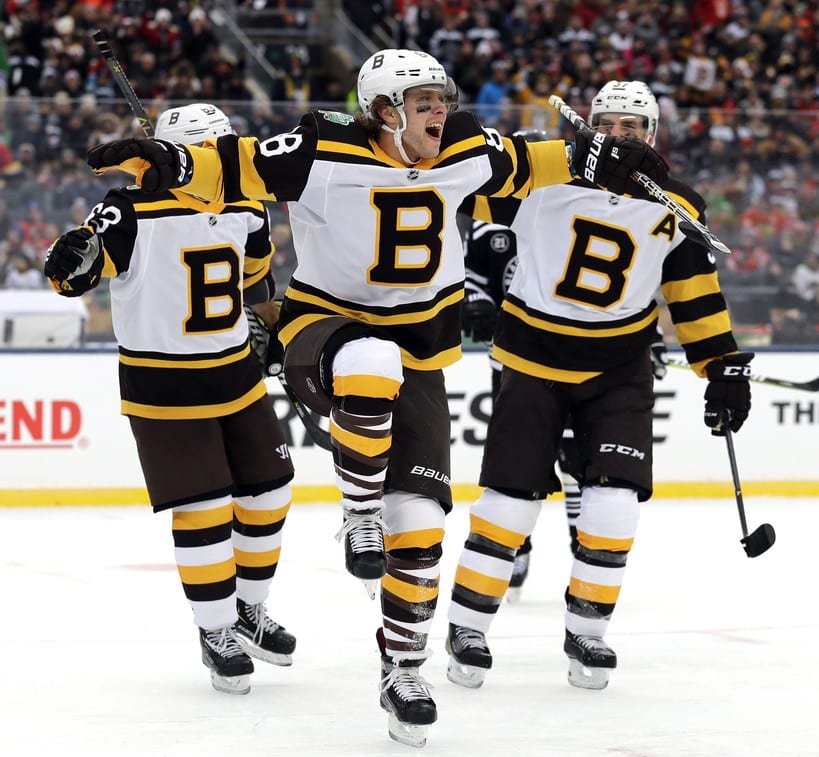 David Pastrnak is off to one of the hottest starts of any NHL player in recent memory. His five-game goal-scoring streak was snapped in Sunday’s 7-4 win against the New York Rangers, but the Czech native made up for it with a ridiculous five-assist – five-assist – night. How about them apples?

That five-point performance, with the addition of another goal in Tuesday’s dominating win over the San Jose Sharks, boosted Pastrnak to 24 points (including 12 goals) in 12 games, both league-leaders.

At just 23 years old, Pastrnak has already cemented himself as an NHL superstar. His 1.23 points per game last season ranked eighth in the league (sandwiched between his two linemates Patrice Bergeron and Brad Marchand with 1.22 and 1.27, respectively). In just 331 NHL games, he’s recorded six hat tricks, including a career-high four-goal performance against the Anaheim Ducks just two weeks ago.

If you look at his Hockey-Reference similarity scores for point shares, you may recognize some of the players he’s similar to – Pavel Datsyuk, Jeremy Roenick, and Vladimir Tarasenko, to name a few. This season presents an opportunity for Pastrnak to fly to new heights, however, as he’s firmly established himself as an early contender for the Hart Trophy.

What It Takes to Win the Hart

To predict whether or not Pastrnak has a shot at the Hart, we need to figure out who qualifies as a candidate. When it comes to a team’s MVP, there’s a bias toward forwards, and high-scoring forwards in particular. Over the last ten seasons, nine Hart winners were forwards. Montreal Canadiens goaltender, Carey Price’s 2015 Hart Trophy victory is the lone exception.

Here’s a look at the point totals of the last ten skaters to win the Hart during a full 82-game season (omitting 2013 due to the lockout, sorry Ovi).

In fact, Kucherov’s 128-point season last year was an outlier in the modern NHL. The Tampa Bay Lightning forward’s total was the most since Lemieux in 1995-96 (161 points).

Even if Pastrnak slows down, he is still positioned to be among the top scorers in the league. The 107.2 average isn’t a guaranteed league-leader, but it should be among the league’s best, and it’s well within his range given what we’ve seen so far.

Another thing to consider, for better or for worse, depending on how you view it, is his linemates. By lining up alongside Patrice Bergeron and Brad Marchand, two star forwards in their own right, Pastrnak’s point total is almost guaranteed to climb.

On the flip side, you could argue that Pastrnak’s value is partially because of his linemates, thus diminishing his contribution as an individual player. However, that hasn’t been much of a deterrent when it comes to Hart voting. Kucherov’s line last season, for example, often included Steven Stamkos or Brayden Point, both of whom finished among the top dozen scorers in the league. Kucherov was still the clear winner in the Hart race. While Pastrnak’s linemates play a role in his production, they’re more likely to improve his chances rather than diminish his value.

We’ve already established that there’s a bias toward offensive production when it comes to Hart voting, defensive play still remains a factor. This, too, could help Pastrnak when voting time rolls around. His primary production is offense, yet he’s still a pretty strong two-way forward. At the very least, it would be difficult to argue that Pastrnak’s defensive game would hurt his chances. He may not be as reliable defensively as his four-time Selke-winning linemate Bergeron (who is?), but he’s far from a liability on the defensive end.

It’s too early in the season to be making too strong a judgment about the Hart, but as of now, Pastrnak is the front-runner.

Offensively, he’s producing at an astonishing rate. How sustainable that rate is remains to be seen. But, history tells us that Pastrnak is pretty consistent when it comes to production. In 2018-19, he averaged at least a point per game in every month of the season, indicating that he’s not overly prone to streaky production. His defensive game, while not elite, is good enough to provide some extra value.

We’ve mentioned that Pastrnak’s line could help him but, in fact, his team’s performance as a whole could play a role. The Bruins are off to a hot start and that’s another bonus for his Hart chances. Hart Trophy winners almost always qualify for the postseason. The last player to win it on a team that failed to qualify for the playoffs was, you guessed it, Mario Lemieux back in 1988.

For what it’s worth, 10 of the last 14 players to win the Hart came out of the Eastern Conference. Call that bias or coincidence, it’s what you will. Regardless, Pastrnak’s train has left the station en route to the Hart.