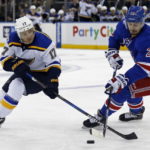 One executive said the St. Louis Blues and Pietrangelo appear to be waiting for the other side to make the first move. Getting a deal done may be harder than they had thought.

Even if Krug is not re-signed by the trade deadline, nobody expects the Boston Bruins to trade him.

Putting Vladimir Tarasenko on the LTIR will give the Blues an opportunity to add someone. New York Rangers Chris Kreider would be a perfect fit for them.

The Minnesota Wild have made forward Kevin Fiala a healthy scratch twice this season already. They could use his offense and ideally he’s part of their solution, but things are shakey.

Detroit Red Wings forward Andreas Athanasiou is in his contract year and is without a goal. can’t say for sure that the Wings have put his name out there.

Buffalo Sabres Evan Rodrigues would be perfect in both Ottawa and Toronto, though not sure the Sabres would want to do a trade with the Maple Leafs.

The Maple Leafs would trade defenseman Martin Marincin, though Jake Muzzin‘s injury might change that.

The Pittsburgh Penguins are going to add to their roster.

It’s believed that the Penguins and defenseman Marcus Pettersson have a contract extension all but done and just waiting until they are eligible to make it official after January 1st.

The Chicago Blackhawks investigated last season about Brent Seabrook‘s willingness to be traded. They didn’t specifically ask him. He has four years left at $6.875 million per.

About seven teams met with NCAA-Minnesota State defenseman Connor Mackey in September. Canadian teams could be interested. His dad, David, was born in BC and played 126 NHL games. Would think the Jets would be interested.

Effects of COVID-19 still a concern as another Vancouver Canucks game delay announced
Coyotes take on the Wild on 4-game losing streak
‘Not ideal for anybody’: J.T. Miller unsure if safety is priority amid Canucks’ comeback
Blue Jackets’ Depleted Defense a Boon for Del Zotto
Today in Hockey History: April 16