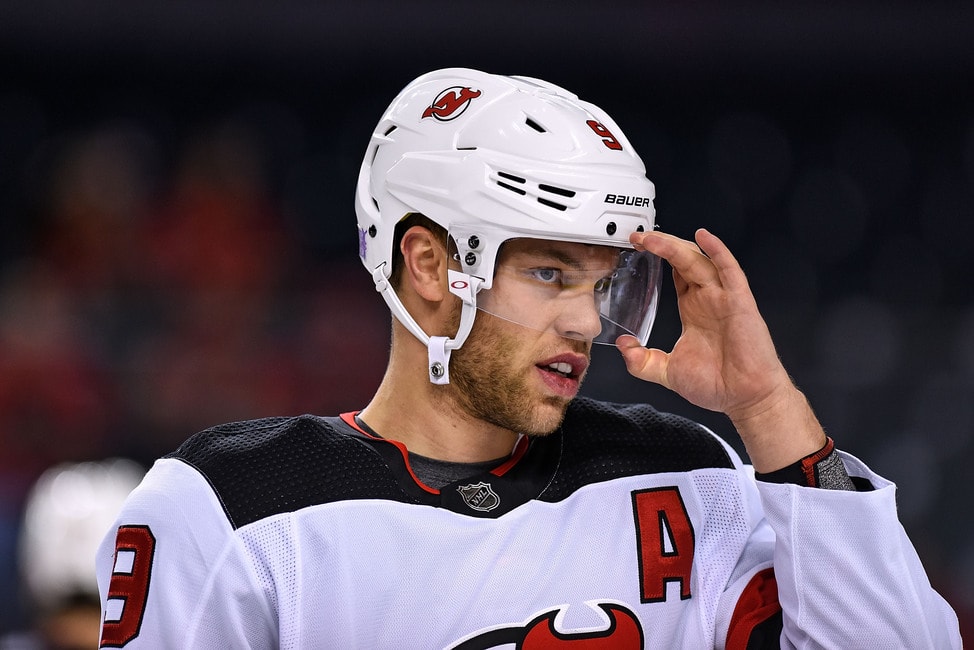 It’s no secret that the New Jersey Devils are looking to trade superstar winger and 2018 Hart Trophy winner Taylor Hall before the 2020 NHL trade deadline.

The 28-year-old Albertan is in the final season of a seven-year, $42 million contract, and the 9-17-5 Devils are going nowhere fast in 2019-20. It appears as if there’s no chance that Hall will re-sign in New Jersey, so general manager Ray Shero has an easy choice to make.

Shero needs to move Hall as early as possible in order to maximize New Jersey’s possible return. The Devils’ GM can’t afford to let this situation play out like the John Tavares/New York Islanders saga did two years ago. Tavares entered the 2017-18 season on the final year of his contract, but Isles’ GM Garth Snow failed to move Tavares before the deadline and watched the face of the franchise depart for the Toronto Maple Leafs in free agency on July 1.

Snow lost his job that same summer, likely as a result of his inability to get something back for Tavares before he walked in free agency.

Shero, who has presided over the Devils since 2015, needs to get this right. His job security may depend on it.

The Devils have made the playoffs once under Shero, in this, his fifth season with the team. Head coach John Hynes already was fired back on Dec. 3 – if Shero doesn’t maximize his return for his valuable rentals at the deadline, ownership may not feel comfortable with letting Shero make a coaching hire in the spring.

Thus, Shero needs to move Hall before losing him for nothing.

Where Do the Coyotes Come In?

You’re probably wondering what all of this has to do with the Arizona Coyotes. In the Dec. 4 edition of his “31 Thoughts” piece over at Sportsnet, Elliotte Friedman suggested that Arizona is “making a serious effort” to acquire Hall. Other hockey insiders, such as John Shannon, Pierre LeBrun, and Bob McKenzie, have recently suggested the same.

That Arizona is even being mentioned as a possible destination for Hall has come as a bit of a surprise. The Coyotes have rarely, if ever, been involved in these kinds of trade rumors in recent memory, but things have changed in 2019. After acquiring Phil Kessel in a trade over the summer, the Coyotes are off to a 19-11-4 start and are right in the middle of the playoff hunt in the Western Conference. They’re buyers instead of sellers for the first time in quite a while.

However, the Coyotes’ success in 2019-20 has come thanks to the club’s defensive prowess, not their offensive abilities. Entering play on Saturday, the Coyotes are averaging 2.68 goals per game, which ranks 23rd in the league.

Last season, nine teams averaged 2.70 goals per game or less, and the average point total for those clubs was 80. Only one, the Dallas Stars, qualified for the Stanley Cup playoffs, and they were defeated in the second round by the eventual champion St. Louis Blues after scoring just a single goal in Games 6 and 7 in a series they once led three games to two.

The Coyotes are going to have to score some goals to get to where they want to be, so it doesn’t really come as a surprise that general manager John Chayka is looking into making an addition to his forward group. However, is Hall the answer? He’d cost a lot, and Chayka has invested a considerable amount of time in rebuilding the Coyotes’ farm system since taking over for Don Maloney in 2016.

What Would Hall Cost?

Per Friedman’s piece, the Devils “have made it clear” that they will trade Hall only for early-round picks and/or top prospects, preferably defensemen, who will soon be ready to play at the NHL level.

The Coyotes do not have their third-round pick this season after including it in the Carl Soderberg trade, but they own all of their other picks. Draft-pick compensation would not be an issue in a Hall trade.

When it comes to prospects, the Coyotes likely have only two who would qualify as “top” prospects – 2019 first-round pick Victor Soderstrom, and 2018 first-rounder Barrett Hayton. Either one of them would probably suffice, but the Devils likely would prefer Soderstrom, a defenseman.

Additionally, Chayka would have to make the salary work – trading for Hall would put Arizona approximately $2.9 million over the salary cap, so the Coyotes would have to send some money the other way.

A candidate to be sent to New Jersey in a Hall trade is center Derek Stepan – he carries a cap hit of $6.5 million and is signed through next season. He’s having a down year by his standards, with just five goals and six assists along with a faceoff percentage of 45.7% through 34 games, but, as a veteran who played in the Stanley Cup Final with the New York Rangers in 2014, he could help the Devils as they rebuild.

Is Hall “Only” a Rental?

Would Chayka choose to mortgage part of the franchise’s future in order to help the team now? His decision likely will come down to one question:

Is Taylor Hall interested in re-signing with the Coyotes beyond the 2019-20 season?

There’s no doubt that Hall would instantly become Arizona’s best offensive player if acquired, but, if he’s intent on testing free agency on July 1, the Coyotes may need to reconsider making this trade.

If the Coyotes are only “renting” Hall, Chayka must be sure that he gets his money’s worth in 2019-20, so to speak. Losing a top prospect and a first-round pick would be a lot easier to deal with if the franchise makes a deep playoff run in the spring. If Chayka gives up two valuable assets, and the Coyotes lose in the first round (or don’t qualify for the playoffs at all), the move has the potential to set Arizona’s rebuild back significantly.

Will Chayka look to improve his team now, at the expense of future draft picks and prospects, or will he stand pat and stick with the Pacific Division-leading group he has currently? With trade rumors swirling, and with Hall now being healthy scratched by New Jersey, we could get an answer soon.