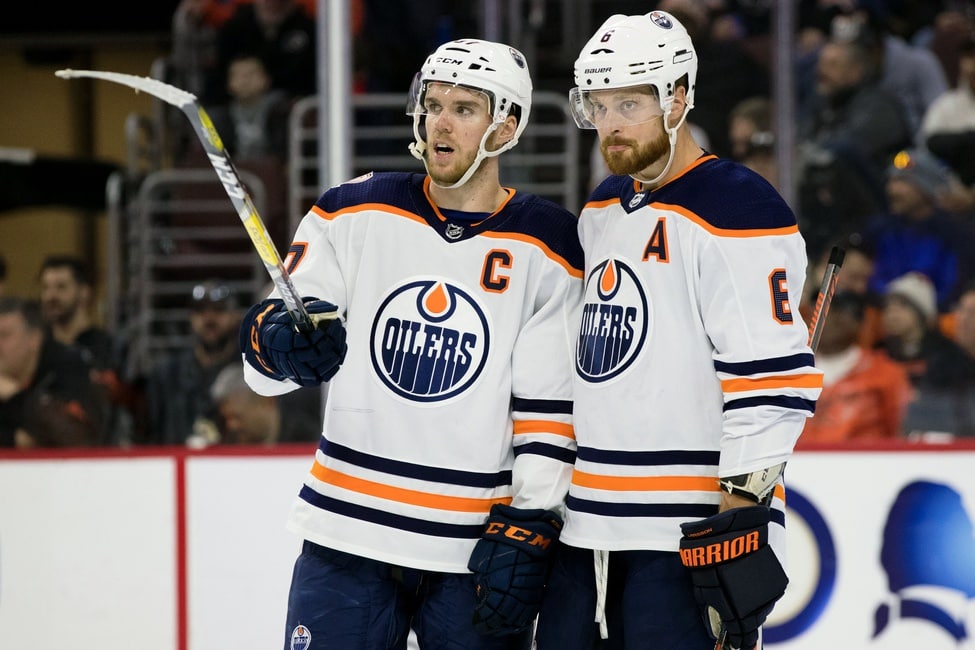 In an Edmonton Oilers news and rumors update, there is talk surrounding the Toronto Maple Leafs interest in Adam Larsson, news on the injury to Oscar Klefbom and trade speculation over the Oilers interest in Blake Coleman before he moved to Tampa Bay. Plus, what will the Oilers do with so many injuries currently plaguing the roster?

The Edmonton Oilers revealed they will be without their No. 1 defenseman as Oscar Klefbom has gone down with a shoulder injury and will miss 2-3 weeks worth of action. This has led to a ton of speculation as to what might be next for the Oilers.

With only six days left to the close of the NHL Trade Deadline, the Oilers are being kicked hard by injuries. Meanwhile, they’re watching as defenseman come off the board in trades. Brenden Dillion and Dylan DeMelo were both moved Tuesday and tons of buzz surrounds Alec Martinez and the likelihood he is on his way to Vegas. As teams improve in the Western Conference, what will the Oilers do?

There’s been talk about calling up players or how well Darnell Nurse can step into a larger role but would the Oilers make a deal for a d-man? Kris Russell is rumored to be close to returning, but news on Adam Larsson comes at an interesting time.

Related: The Best NHL Defensemen Ever

According to sources, the Oilers and Maple Leafs have been quietly linked in trade discussions for some time and Adam Larsson’s name seems to be at the center of those talks. Chris Johnston recently said during a spot on SN590, that Larsson is among other top-four right-shot defencemen the Leafs have looked into.

But, with the news of Klefbom’s injury, it seems unlikely the Oilers would move a top-four defenseman at this point in the season. Doing so would crush the Oilers blue line or put far too much pressure on young and unproven blueliners. It doesn’t seem logical those talks would continue.

The rumors make sense as Toronto is obviously looking for a defenceman and the Oilers also could use a top-six forward with all the injuries facing the team. The timing is just not right.

Related: 20 Biggest NHL Trades in the Past Year

In the end, the Tampa Bay Lightning outbid the Boston Bruins for Blake Coleman, but Elliotte Friedman noted in his 31 thoughts article that Edmonton made a real push. In fact, a couple of teams told Friedman that Coleman was the guy the Oilers would give up a first-rounder for.

Obviously, that Coleman was moved to Tampa means that New Jersey valued whatever prospects were being offered more than what Edmonton was willing to add to the first-round pick. But, the Oilers may have been interested because Coleman has another year left on his deal and that term would have been important next season.

With all the injuries to the team, the Edmonton Oilers have an extreme test facing them. If they can weather the storm, they’ll be getting Russell back soon and Connor McDavid is a couple of games away from potentially returning to action. They just need to make it that far with a .500 record.

To stay afloat, Edmonton needs Leon Drasaitl, Ryan Nugent-Hopkins and Kailer Yamamoto to stay hot, for Ethan Bear and Darnell Nurse to step up their game in the top-two roles and for the goal-tending to be outstanding.

While the Oilers aren’t the only team facing injuries, they might want to see if there are inexpensive stop-gaps available. Jim Matheson of the Edmonton Journal tweeted, “If Oilers with very little cap room want to add a veteran left-shot D as a rental with Klefbom and Russell out, Del Zotto ($750,000) in Anaheim makes most sense for draft pick.” Would this be the type of move that works for the Oilers?

The Oilers are also rumored to be slightly interested in Kyle Palmieri. He’s not a stop-gap though and he’s not inexpensive.

Pittsburgh takes on Backstrom and the Capitals
Hurricanes’ Jake Bean Proving He Should Stay in the Lineup
10 Reasons Hockey Is the Greatest Sport on Earth
Blues lose D Gunnarsson (knee) for rest of year
Kings take on the Blues, seek 5th straight win