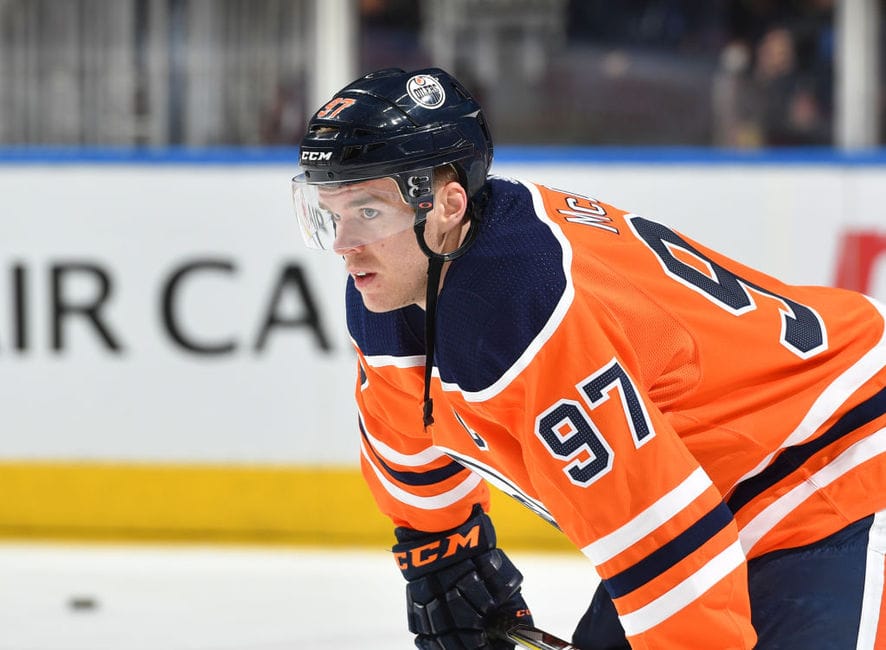 In an Edmonton Oilers news and rumors update, one non-Oiler NHL’er — a candidate for the Hart Trophy in his own right — believes Leon Draisaitl should win it. Is Carl Soderberg on the Oilers radar as a possible free agent? Will Edmonton get selected as the second hub city? Finally, if you happen to have more money than you know what to do with, there’s a Connor McDavid rookie card up for auction that would be quite the prize.

He’ll likely get a lot of votes himself, but don’t tell Boston Bruins’ David Pastrnak he should be the Hart Trophy winner. He believes Leon Draisaitl of the Edmonton Oilers should win and by a landslide. “It’s absolutely no question … It’s going to be and it should be Draisaitl,” he told reporters during a conference call Monday.

He’s got a point. Draisaitl had 110 points, was the leading NHL scorer by a wide margin, and was a key contributor to the Oilers having a winning season before the regular season hit pause.

The ballots were officially filed by the Professional Hockey Writers Association, who vote on the Hart Trophy, on Monday, so it will be interesting to see if Pastrnak is right.

Jonathan Willis of The Athletic writes that Carl Soderberg is a name the Edmonton Oilers shouldn’t ignore when it comes to adding depth at center this offseason in free agency. He calls Sodergberg an “intriguing free agent possibility.”

Edmonton, famously, is in need of a third-line centre. The best possible fit is probably via trade, but it’s always a challenge to talk another team into surrendering that kind of player, to say nothing of giving up the return. There aren’t a lot of good fits on the open market. Soderberg is one player who might work as a stopgap.

Willis thinks he’ll be an inexpensive option knowing he’ll need to take a pay cut and with salary uncertainty. He says he’d offer experience, second-unit power play help, and penalty killing. Willis adds, “Soderberg’s age makes him a risk but Ken Holland has shown in the past he doesn’t mind taking chances on veterans.”

Writer Steve Simmons is reporting that Toronto is likely to be the second hub city chosen by the NHL. He writes:

My understanding is that Toronto is the choice the NHL would want if there was a Canadian hub city allowed. If that happened, it would be Vegas and Toronto for NHL games.

What does that mean for Edmonton, who has been pitching hard for consideration? Well, the Oilers aren’t out of it yet, but things don’t look good. The TSN Insiders noted that of the three Canadian teams still in the running, none picked Edmonton as a favorite. The times zones and Toronto being the hub of hockey all play into them being the favorites.

For McDavid fans who have $70,274 USD (about $95,188 CAD) sitting around, there’s a heck of a deal to be had. A Connor McDavid rookie card went up for auction at Lelands Auctions and it is bound to break the current record for the most expensive modern day hockey card sold.

Apparently, the card is worth so much because it’s number 97 in a series of 99, and matches McDavid’s jersey number. The card is officially listed as 2015-16 Upper Deck The Cup #197 Connor McDavid Rookie Patch Auto on Lelands.com.

source – ”This card might not ever surface again’: Record-setting Connor McDavid rookie card up for auction’ – Ryan Garner – Edmonton Journal – 06/17/2020

The previous record for the most expensive hockey card was set by another McDavid rookie card from the same set. That card was numbered 75 of 99 and sold for $55,655 USD on May 24th, 2018.