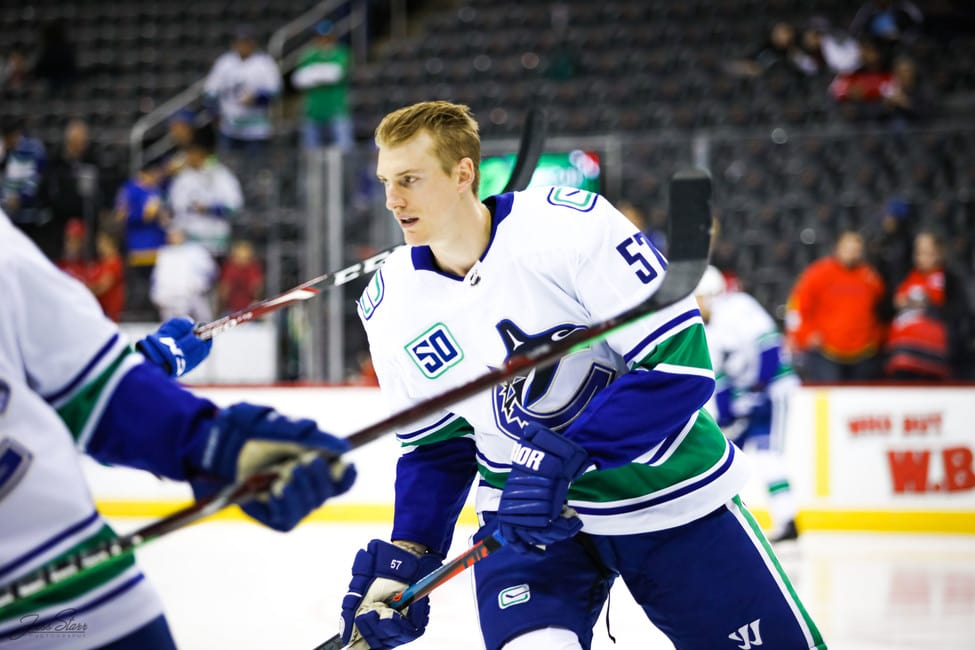 Tyler Myers has missed the majority of the Vancouver Canucks’ postseason after suffering a separated shoulder in Game 2 against the St. Louis Blues. Fortunately, it seems like he will be ready to return to Vancouver’s lineup sometime this week, which will no doubt provide the Canucks with some much-needed depth on the back end.

Should he return before the end of the series, Travis Green will have some decisions to make regarding his defensive pairs. Before Myers went down with his injury, he was mostly deployed alongside Oscar Fantenburg on the team’s third pairing, but is this going to be the case once he hits the ice again?

How Will the Pairings Look?

In order to answer this question, we need to first take a look at how well every blueliner has performed and who they’ve been most successful playing beside. After looking at some stats, it’s obvious that the Canucks’ first pairing of Alex Edler and Troy Stecher should be kept together. They’ve been inseparable for much of the playoffs and have produced some adequate results with one another.

When together, Edler and Stecher have controlled shot attempts at 5-on-5 46% of the time while owning an expected goals share of 45%. These numbers are far from ideal, but we need to keep in mind that they’ve played against some of the toughest competition throughout the playoffs. Edler, who quietly continues to impress, spent the majority of his ice time against the Eric Staal and Ryan O’Reilly lines during the first two series, and the two Canuck blueliners have both been deployed against the Vegas Golden Knights’ first line for most of the current round.

The second pairing consisting of Chris Tanev and Quinn Hughes started getting interesting. They’ve spent the majority of the season together and have performed decently in the playoffs; they own an expected goals share of 49.7% together and have controlled shot attempts 46.8% of the time at 5-on-5, so there shouldn’t be any need to break them up.

However, Myers spent a large portion of his time with Hughes before his injury, and the two produced some excellent numbers as a duo. In 38 minutes of even-strength together, Hughes and Myers controlled shot attempts almost 55% of the time and had an expected goal share of over 52.38%. It’s a relatively small sample size and they accomplished this playing mostly against the Minnesota Wild, but it’s definitely something to keep in mind if Vancouver’s defensive corps is struggling against the Golden Knights’ relentless forecheck.

Taking these factors into consideration, it seems likely that Green will elect to keep the top two pairings intact while slotting Myers beside Fantenburg once he’s ready to return to the lineup. If the Canucks are in need of a shakeup, don’t be surprised if the coaching staff decides to play Hughes alongside Myers to try and get them to rediscover some of their previous success together. Tanev can then slide down to the third pairing, which will allow him and Fantenburg to be deployed against some weaker competition.

Potential Matchups For Each Pairing

In terms of matchups, the best option will be to play Hughes and Tanev against Vegas’ first line and have the Stecher and Edler pairing face either Jonathan Marchessault or Alex Tuch’s lines. This is because the Golden Knights’ first unit has dominated no matter who they’ve played against; however, Edler and Stecher have fared much better against Marchessault and Tuch when compared to Hughes and Tanev, as they’ve been able to control shot attempts and have an expected goals share of over 55% against both Golden Knights forwards.

If Vancouver’s prized free-agent addition is able to return sometime during the series, he and Fantenburg can then match-up against one of the Golden Knights’ second or third line, depending on who Edler and Stecher face. As previously stated, if the Canucks are in need of a boost, they can choose to reunite Hughes and Myers and hope that they can continue their strong play together and have them match-up against the Golden Knights’ hottest trio.

Taking everything into account, the Canucks are undoubtedly hoping that Myers makes a quick recovery and will be able to suit up sometime during the series. His return will help the team’s defensive depth and greatly increase the Canucks’ chances of upsetting a potent Golden Knights squad.

All stats from Natural Stat Trick.