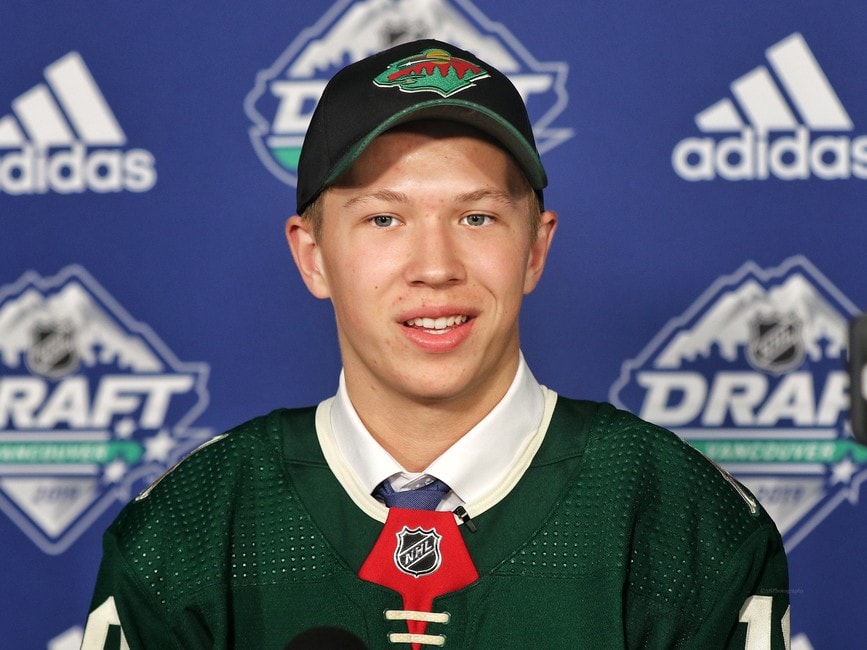 Saturday night was a huge night for NCAA players making their professional debuts. The Montreal Canadiens’ top prospect took home a huge honor while scoring his first goals at the next level. The Minnesota Wild have another talented young forward on the way, as he proved in his first American Hockey League (AHL) game. Lastly, a San Jose Sharks prospect added some more hardware to his growing collection.

A Day to Remember for Cole Caufield

Imagine being named the best play in all of college hockey on the same day you score two goals in your professional debut. That is exactly how things went down for Caufield on Friday.

During the Frozen Four’s off day, the NCAA honored Caufield as its top player for 2020-21 by giving him the Hobey Baker Award. He led the nation with 30 goals and 52 points in 31 games for the University of Wisconsin. He joined former Canadien Blake Geoffrion as the only Badgers to win the award.

“It obviously means a lot to me, it means a lot to my school back at Wisconsin,” Caufield told NHL Network. “I couldn’t be more honored and privileged to receive this award. It’s something that I was working for the whole year, so it feels pretty good.”

Caufield was not on hand to receive the Hobey Baker Award because he was in Toronto getting ready to make his professional debut with the Laval Rocket. If fans in Montreal weren’t excited enough, he went on and proved he is worth all the hype.

Early in the second period, he scored his first professional goal with an absolute snipe on the power play.

Jordan Weal was able to gain control off a rebound then found Caufield all alone at the left dot. Teams will learn quickly that you cannot give him that kind of time or space because he will kill you.

After picking up the primary assist on Xavier Ouellet’s eventual game-winning goal, he scored a second goal midway through the third period. This time he didn’t use his deadly shot but rather showed off his slick hands to deke the puck around goaltender Joseph Woll.

“It was a fun night,” Caufield said after the game. “Obviously, it was special with the award, but all my focus was here with this game. So, it felt good to get the win.

“I mean, hockey’s the best thing to do in the world. So, any time I can get out there, I have the best time and it always feels a little bit better when you win.”

I feel fans in Laval won’t have too many games to enjoy Caufield on their team. It is only a matter of time before he makes a move to Montreal.

Caufield wasn’t the only former college star to make his professional debut on Friday night. Boldy suited up for the Iowa Wild just a few days after his season with Boston College came to a disappointing end in the NCAA tournament.

Boldy was a difference-maker in the Wild’s 4-1 victory over the AHL-leading Chicago Wolves. Late in the first period, he increased Iowa’s lead with a snipe on the power play.

Much like Caufield’s first goal, Boldy was given a ton of time and space at the dot, where he went down to one knee to blast an absolute rocket past Connor Ingram. Reigning AHL MVP Gerry Mayhew picked up the assist on the point.

Later in the second period, Boldy showed off that he isn’t a one-trick pony. He made this beautiful saucer pass to set up defensive prospect Calen Addison’s sixth goal of the season and cap off the scoring.

Boldy and Addison are two names that Minnesota Wild fans will know for years to come.

A handful of other awards were dished out on Friday night, in addition to the Hobey Baker. One of those was the Tim Taylor Award, given each year to the NCAA’s best first-year player. This season’s honor went to University of Michigan freshman Bordeleau.

The Sharks’ 2020 second-round pick (38th overall) led all freshmen in scoring with 30 points and his 22 assists were the most on a loaded Wolverines team. He can add the Tim Taylor Award to his trophy case that already includes the Big 10 Freshman of the Year honor.

Bordeleau is the second Michigan player to win this award and the first since Kyle Connor of the Winnipeg Jets did in 2016. He capped off his fabulous first season by being named a member of the College Hockey News All-Rookie Team and the Big Ten All-Freshman Team.