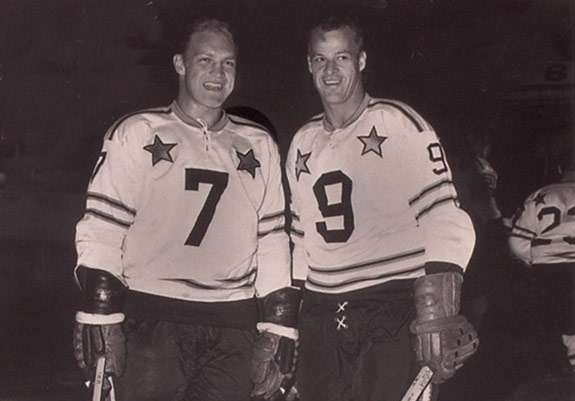 April 11 is an important date in National Hockey League history. Two legends played their final game in the league as teammates, the first playoff goalie goal was scored and a trio of franchises picked up their first Stanley Cup playoff wins. Let’s begin our daily trip back in time to relive the best moments from this date.

For much of their Hall of Fame careers, Gordie Howe and Bobby Hull were bitter rivals. Howe was the top star for the Detroit Red Wings while Hull rewrote the franchise record book for the Chicago Blackhawks. At the height of their rivalry, these two battled it out in the 1961 Stanley Cup Final, with the Hull and the Blackhawks coming out on top.

19 years later, the two veterans became teammates on the Hartford Whalers during the 1979-80 season. On April 11, 1980, the Whalers were swept out of the playoffs with a 4-3 overtime loss to the Montreal Canadiens. It would be the final game for both legends and it was rather appropriate that it came against the Canadiens; a team, both players, had legendary battles against.

Howe retired as the NHL’s all-time leading scorer with 801 goals and 1,850 points. The four-time Stanley Cup winner and six-time Hart Trophy recipient was inducted into the Hockey Hall of Fame in 1972 following his first retirement from the game.

Hull’s remarkable career came to an end after scoring 610 goals and 1153 points in the NHL. He was the first player in league history to score over 50 goals in a single season. Hull is still the Blackhawks’ all-time leading goal scorer. He was inducted into the Hockey Hall of Fame in 1983.

However, he made a play exactly two years later that put him in the NHL history books. Late in Game 5 of the Patrick Division Semifinals, the Washington Capitals went on a power play while trailing by two goals. Out of desperation, they pulled goaltender Pete Peeters for an extra attacker. With no threat of icing, moments later, Hextall sent the puck down the length of the ice to put the Flyers up 8-5.

On April 11, 1996, the Bruins beat the Whalers to qualify for the Stanley Cup playoffs for the 29th straight season. This streak is still the longest by any North American professional sports team. However, the streak ended the following season when the Bruins won only 26 games, their fewest in 30 years.

One year later, Alexei Zhamnov scored his sixth career hat trick in the Blackhawks’ 7-3 win over the visiting Calgary Flames. The Blackhawks earned a postseason berth for the 28th consecutive season, the new longest active streak in professional sports. Much like the Bruins in the previous year, the Blackhawks’ streak ended the following season. In fact, they would only qualify for the Stanley Cup playoffs once between 1998 and 2009.

On April 11, 1936, Pete Kelly scored the eventual game-winning goal against the Toronto Maple Leafs to give the Red Wings the first of their 11 Stanley Cup championships. They won seven of their eight postseason games to become the last of the “Original Six” teams to win the Stanley Cup.

Bob Pulford scored the latest game-winning goal in playoff history on April 11, 1964. With just two seconds left in regulation, Pulford beats Red Wings’ legend Terry Sawchuk for a shorthanded goal and a 3-2 Maple Leafs win in Game 1 of the Stanley Cup Final. Toronto went on to win the series in seven games for their third straight championship.

Making history, especially in the playoffs, was nothing new for Bruins Hall of Famer Bobby Orr. On April 11, 1971, he lit the lamp three times to become the first defenseman since George Boucher in 1921 to have a hat trick in a playoff game. Since then, 10 more defensemen have scored postseason hat tricks with the most recent being Andy Delmore of the Pittsburgh Penguins in 2000.

On April 11, 1975, the New York Islanders stunned their inter-city rivals when they knocked the Rangers out of the first round of the playoffs. J.P. Parise scored just 11 seconds into overtime to give the Islanders their first playoff series win in franchise history. Parise’s goal was the fastest overtime goal in postseason history until 1986 when Brian Skrudland of the Canadiens scored just nine seconds into the extra period to beat the Calgary Flames.

The Bruins and Minnesota North Stars combined
to set a Stanley Cup playoff record for most shorthanded goals in one game,
with four, on April 11, 1981. All three of the Bruins’ goals in a 6-3 loss came
while on the penalty kill.

St. Louis Blues rookie and current Carolina Hurricanes head coach, Rod Brind’Amour, scored his first NHL goal on his first shot in the league on April 11, 1989. His memorable moment came during the Blues’ 6-1 win over the North Stars in Game 5 of the Norris Division Semifinals.

On April 11, 2004, despite being outshot 15-1 in the first 15 minutes of the game, Tomas Vokoun made 40 saves to help the Nashville Predators beat the Red Wings 3-1 in Game 3 of the Western Conference Quarter-Finals. It was the first Stanley Cup playoff win in the Predators’ franchise history.

On that same night, Jose Theodore of the Canadiens became just the third NHL goaltender to get two assists in a playoff game. He was credited with assists on both of Alex Kovalev’s goals in the 1st period of a 3-2 win over the visiting Bruins in Game 3 of the Eastern Conference Quarterfinals.

In a season full of historic wins, the Vegas Golden Knights beat the Los Angeles Kings 1-0 for their first postseason win in franchise history. This started a remarkable playoff run that took them all the way to the Stanley Cup Final before losing to the Capitals.

Also, on that night, the Winnipeg Jets beat the Minnesota Wild 3-2 in their series opener. This was the franchise’s first Stanley Cup playoff win since entering the league as the Atlanta Thrashers in 1999.

On April 11, 2019, Mitch Marner became just the second player in Maple Leafs’ history to score on a penalty shot in a playoff game. His shorthanded goal was his second of the night went on to be the game-winner in a 4-1 victory over the Bruins. Marner is one of five players to score a shorthanded goal on a penalty shot in the Stanley Cup playoffs and he was the first to do it since Dan Cleary of the Red Wings in 2007.

On April 11, 1993, Chris Chelios collected
his 500th career NHL point with an assist as the Blackhawks tied the Tampa Bay
Lightning at the old Chicago Stadium. He was far from down in his Hall of Fame
career as Chelios is 10th all-time among defensemen with 948 career
points.

Four years later, Mario Lemieux hits the 50-goal mark for the sixth time in his career when he beats John Vanbeisbrouck of the Florida Panthers on a penalty shot. He is the first player in league history to score his 50th goal of the season via the penalty shot.

On April 11, 2002, Roger Neilson became the first head coach to be behind the bench for eight different NHL teams. He leads the Ottawa Senators to a 4-0 win over the Bruins in Neilson’s 999th career game as an NHL coach.