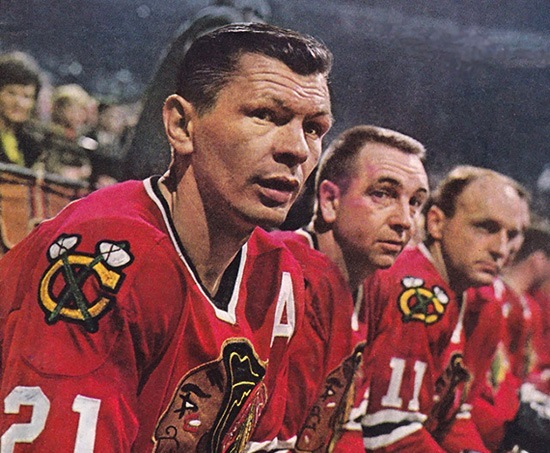 Some of the greatest players to ever play in the National Hockey League had big moments on April 14. A pair of legends hoisted the Stanley Cup for the final time in their careers. Also, the longest winning streak and winningest season in league history both ended on this date. Let’s take our daily trip back in time to relive the best memories from this date.

On April 14, 1955, the Detroit Red Wings knocked off the Montreal Canadiens 3-1 in Game 7 of the Stanley Cup Final to win the championship for the second straight season and the fourth time in the last six. Alex Delvecchio scores twice in the victory, with Gordie Howe adding a goal in between. Although his professional career did not officially end until 1980, this was the last championship for Howe. This was the Red Wings’ final Stanley Cup win until 1997.

The Canadiens bounced back well from their loss to the Red Wings as they went on to win the next five Stanley Cups. On April 14, 1960, they completed a four-game sweep of the Toronto Maple Leafs to become the first and only team in NHL history to win five straight championships. The 1960 Canadiens did not lose in the postseason as they swept their Semifinal series against the Boston Bruins, as well.

A pair of legendary players found the scoresheet as Jean Beliveau scored two goals and Maurice Richard assisted on a goal by his brother Henri.

The assist is Richard’s 126th and final Stanley Cup playoff point, as this turns out to be the final game of his remarkable career. He reported to training camp the following September but announced his retirement before the season began. He scored 544 goals and 966 points in 978 games for the Canadiens and won eight Stanley Cups. The Hockey Hall of Fame waived its three-year waiting period and inducted Richards in 1961.

It’s All About the Streaks

Steve Larmer of the Chicago Blackhawks played in his 800th consecutive game on April 14, 1992, a 5-3 loss to the St. Louis Blues. The milestone left Larmer third on the NHL’s all-time list behind Doug Jarvis (964) and Garry Unger (914) in consecutive games played. He never missed a game in his entire career with the Blackhawks.

On April 14, 1993, the longest winning streak in NHL history finally came to an end when the Pittsburgh Penguins tie the New Jersey Devils on the final day of the regular season. The draw ends the Penguins’ 17-game winning streak, two games longer than the previous record of 15 held by the 1981-82 New York Islanders. Mario Lemieux has two goals and an assist to close out the season with a league-leading 160 points in just 60 games.

That same evening, Adam Oates extended his Bruins’ team record by picking up an assist for the 18th straight game in a 4-2 win at the Ottawa Senators. He racked up 28 assists during the 18-game streak, which remains the second-longest in NHL history behind Wayne Gretzky’s 23-game assist streak in 1990-91.

On April 14, 2001, the Red Wings set an NHL record by winning their 13th consecutive first-round playoff game. The milestone victory came in a 4-0 win over the Los Angeles Kings in Game 2 of the Western Conference Quarterfinals. The previous record of the 12 straight first-round wins was held by the Edmonton Oilers, who accomplished the feat between 1983 and 1986.

On April 14, 1980, Blackhawks legend Stan Mikita announced his retirement from the NHL. In 22 seasons, all in Chicago, he scored 541 goals and 1,467 points in 1,396 games. He won two Hart Trophies and was a four-time winner of the Art Ross Trophy. He remains the franchise’s all-time leader in points. The 1961 Stanley Cup winner was inducted into the Hockey Hall of Fame in 1983.

The arena Mikita played all his home games in hosted its final regular-season game exactly 14 years later. On April 14, 1994, the Blackhawks lost 6-4 to the Maple Leafs in the regular-season finale at the Chicago Stadium.

April 14, 1999, provided a handful of big milestones as the 1998-99 regular season neared its completion. First, the New Jersey Devils tied an NHL record for road wins in a season with a 2-1 win at the Buffalo Sabres. They shared the record set by the 1976-77 and 1977-78 Canadiens. Martin Brodeur became the first goaltender in franchise history to win 200 games.

Hall of Fame head coach Scotty Bowman recorded his 1,100th career NHL victory in the Red Wings 4-2 win against the visiting Nashville Predators. Bowman is the only coach ever to win more than 1,000 games and he retired three years later with 1,244 wins.

Finally, Goaltender Curtis Joseph set a Maple Leafs’ team record when he won his 35th game of the year, a 3-2 overtime victory against the Islanders. He broke the record of 34 wins shared by Johnny Bower, Felix Potvin, and Mike Palmateer. Joseph would break his own record the following season with 36 wins. Frederik Andersen holds the franchise record now after winning 38 games in the 2017-18 season.

The Maple Leafs made history on April 14, 1942, by beating the Red Wings 9-2 in Game 5 of the Stanley Cup Final. Don Metz, who did not play in the first three games of the series, scores a hat trick and adds two assists. The nine goals tied the mark the Red Wings scored against the Maple Leafs during the 1936 Stanley Cup Final. They remain the biggest scoring outputs by one team in the history of the Final.

Patrick Roy became the first and only goaltender to win 150 Stanley Cup playoff games on April 18, 2003. He reached the milestone in the Colorado Avalanche’s 3-0 win over the Minnesota Wild for his 23rd and final postseason shutout. His 151 career playoff wins remain the league record, which may never be broken.

On April 14, 2018, David Pastrnak scored three goals and added three assists in the Bruins’ 7-3 win over the Maple Leafs in Game 2 of their first-round series. At just 21 years and 324 days, Pastrnak becomes the youngest player in NHL history to have at least six points in a playoff game. The previous mark was held by Gretzky, who was 22 years and 81 days old when he scored seven points for the Oilers in 1983.

The Red Wings capped off the winningest
season in NHL history on April 14, 1996, with a 5-1 win at the Dallas Stars.
They finished their incredible season with 62 wins in 82 games, two more than the
1976-77 Canadiens won in 80 games. However, the magical regular season ends in
disappointment as they lost to Roy and the Avalanche in the Western Conference Finals.

On that same date, Jaromir Jagr gets two assists to set an NHL record for most points in a season by a right wing, breaking the old record of 147 points set by Mike Bossy. His 149 points that season are still the most by any player at the position.

Scott Mellanby became the first player to
score 250 points as a member of the Florida Panthers on April 14, 1998, when he
picked up a goal in a 3-2 loss to the visiting Ottawa Senators. His 354 points
remain fifth all-time in Panthers franchise history.

On April 14, 2002, goaltender Chris Osgood set an Islanders team record for most games in one season, when he played in his 66th of the year. He broke the mark of 65 games set by Ron Hextall in 1993-94. His record still stands.