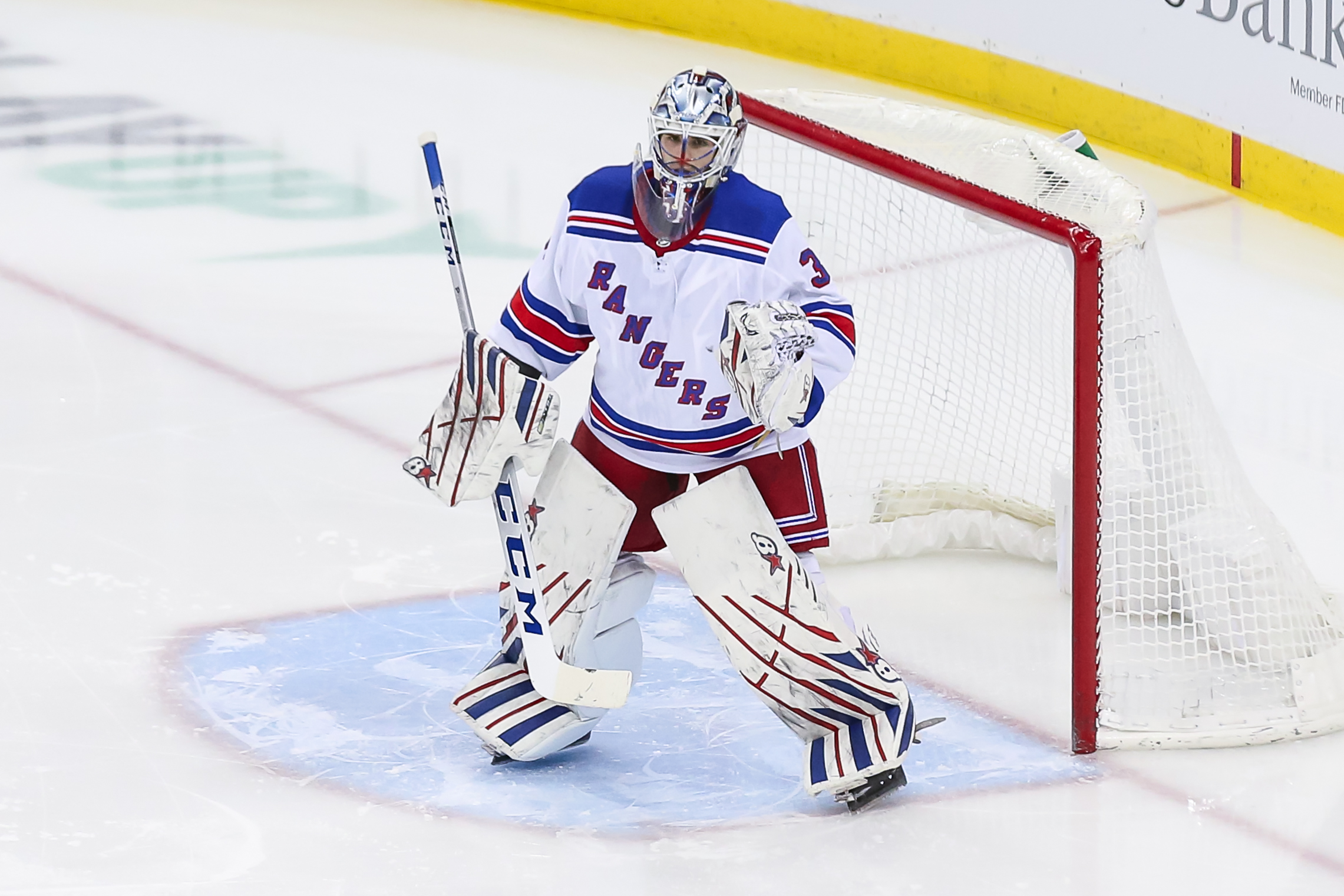 Being a goaltender is one of the most mentally taxing positions in all sports. When things are going well, you are hardly given the proper credit, but you are the focal point of criticism when times are tough. Confidence can be a fleeting attribute, one that the best goalies find a way to rejuvenate despite the ebbs and flows of a full NHL campaign.

Right now, you can see the confidence brimming through the cage of New York Rangers goaltender Igor Shesterkin. On the heels of back-to-back shutouts over the New Jersey Devils, Shesterkin has all but forced head coach David Quinn to continue riding the hot hand – or glove – if you will. The mental toll that a grueling NHL season can have on a young goalie has yet to faze the 25-year-old, whose composure has certainly been noticed by his teammates.

“He’s so calm, and he kind of spreads that calmness throughout the whole team,” said Mika Zibanejad before Friday’s practice. “He is coming up with great saves when we really need them and just been really solid and a rock for us.” That cerebral ability to settle down his teammates has allowed Shesterkin to lead the Rangers to a 7-3-2 record since his return from injury on March 25.

What was once a tandem in goal has turned into a one-person reign of the crease, with Shesterkin starting his fourth consecutive game on Saturday, which would be his 11th start in the Rangers’ last 13 games. Once again, the Rangers’ superb play coincides with a dominant run by the Russian netminder, who pushed the Blueshirts into the qualifying round with a rousing 10-2-0 record just a season ago.

For a playoff birth to even be conceivable, Shesterkin will have to continue his superb play in the net, allowing the Rangers to continue accumulating points at this torrid pace. But for the success that he has had thus far during his 37-game NHL career, Shesterkin’s name has been left out of the conversation for one of the best netminders in the league.

Yes, he is still relatively new. But his numbers are daunting, and the names he is with lead us to one conclusion; Shesterkin is quickly and quietly becoming one of the best goaltenders in the NHL.

After accumulating his first two shutouts in his NHL career and on the season, Shesterkin now boasts a 12-9-3 record, with a 2.25 goals-against average (GAA) and a .925 save percentage (SV%). Out of all goaltenders who have played a minimum of 10 games, his GAA ranks 11th, and his SV% ranks fifth, both excellent marks for the Rangers’ backbone.

Time missed to a groin injury and inconsistent playing time to start the season have impacted those base numbers, but when you delve into the analytics, you start to see the star that is Shesterkin shine.

Conversion of high danger chances usually dictates a team’s success on a nightly basis. Getting those quality opportunities is difficult enough, but if you fail to convert when you are presented with these changes, your odds of winning decrease significantly. Shesterkin is arguably the best goaltender in the league in those categories, leading the way in save percentage and finishing top three in goals against and goals saved above average.

To put that in layman’s terms, the Rangers’ backstop is at his best when the shot quality is at its highest, a characteristic that ushers a calming sensation over the players in front of him. In fact, Shesterkin’s analytical numbers are so good that he is the only goaltender in the entire NHL to rank in the top five in each of those categories.

Fellow Russian and consensus number one goaltender in the league, Andrei Vasilevsky, only beats Shesterkin in two categories (GSAA & HDGSAA). Now, before anyone jumps to conclusions, I am not saying Shesterkin is better than Vasilevsky. But the fact that the Rangers’ goalie is statistically on par with the former Vezina winner should warrant significantly more recognition than he is getting right now.

Is This Brilliance Sustainable?

The short answer to that question is yes. Shesterkin tore up the KHL to a tune of 80-19-5 before making his NHL debut in 2019-20 and has been equally brilliant thus far for the Rangers. The lone cause for concern, which is not a minute issue by any means, is his ability to stay healthy. An unfortunate and scary car accident forced him to miss time last season before a groin injury sidelined him in 2020-21.

If he remains healthy, Shesterkin will continue to be a dominant force in goal, as his track-record projects. The scariest part is, Shesterkin has yet to play a full NHL season, dominating while learning on the fly. A clear hurdle was overcome by finally claiming that first shutout, boosting the young netminder’s confidence to an all-time high.

Shesterkin now rides a 120-minute shutout streak (172:48 against the Devils) and looks poised to carry the Rangers on the run to the postseason single-handedly. His play continues to evolve, staying square to the first shot but having the athleticism recover and stone the rebound attempt. He still has to show what he can do over an 82-game campaign, but Shesterkin has quietly risen to the top of the goaltending crop in the NHL.

I have been an avid hockey fan my entire life and first laced-up skates at three. Now, I am a 22-year-old from Brooklyn, NY, looking to share my passion for hockey through my writing and podcasting.  My show, The Backcheck, covers New York hockey and the NHL and is featured on The Hockey Writer’s Podcast Network. As a columnist, I cover the New York Rangers, doing my best to analyze the team from my unique perspective thoroughly.